Word 365 2016 2013 2010 2007 2003
Multilevel lists can contain numbered lists and bulleted lists. Automatic lists are a handy feature because if you add a paragraph in the middle of a numbered list or rearrange the order of the items in a list, Word automatically renumbers the paragraphs so that they retain their sequence.

3.   To add additional numbered items to your list, move the insertion point to the end of a line formatted and press Enter:

4.   To stop entering items in the list, do one of the following:

See also Customizing multilevel lists and How to turn off automatic creation of bulleted and numbered lists.

Note: More details are available in the Multi-level lists section in the Work with bulleted, numbered and multi-level lists lesson of the Create basic documents free course. 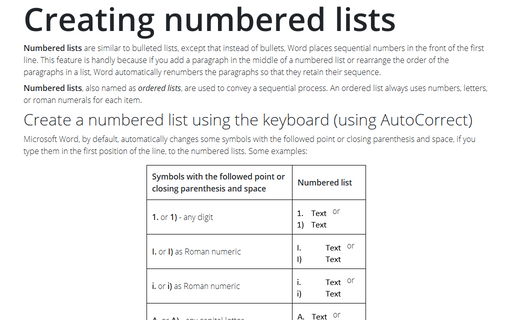 Numbered lists are similar to bulleted lists, except that instead of bullets, Word places sequential numbers in the front of the first line. This feature is handy because if you add a paragraph in the middle of a numbered list or rearrange the order of the paragraphs in a list, Word automatically renumbers the paragraphs so that they retain their sequence. 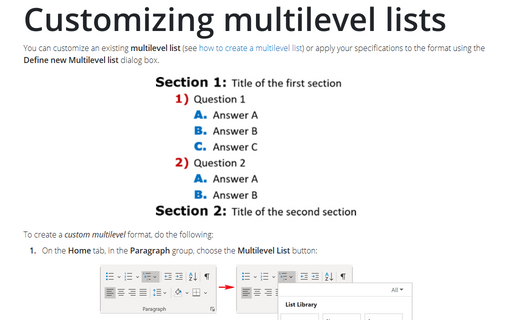 Bulleted lists, also named as unordered lists, are usually used for listing objects, comparable actions, etc. for which order is not important. Unlike a numbered list, all elements of an unordered list are separated by the same symbols, bullets.