Word 365 2016
While typing word documents, you usually separate words and sentences by pressing the Space key (also known as Spacebar), which inserts a regular general-purpose space character. However, some Microsoft Word documents may contain other kinds of spaces. You can discover those white-space symbols during editing the document but not on printing.

To show non-printable and white-space symbols in Microsoft Word, click the button button Show/Hide ¶ (or pressing Ctrl+* or Ctrl+Shift+8):

You will be able to see the following marks for white-space characters:

A general rule of publishing is to use only one normal space between words (the only exception is a pre-formatted text, e.g., code listings). If you need to align text at fixed positions of the line, use tabs and tab stops.

2)   A degree symbols between word represents a nonbreaking space (also called non-breaking space, no-break space, non-breakable space (NBSP), hard space, or fixed space) that prevents text wrapping at the end of the line. A Nonbreaking space in the Word document looks like:

A general rule of publishing is to use non-breaking spaces between words of organization and person names, postal addresses, etc.

3)   A little dot with varying gaps before and after the dot represents Em Space and En Space. These spaces have different widths on printing:

4)   A vertical bar between words represents a ¼ Em space (also known as mid-space) is a space with the ¼ width of the lowercase m character:

If you want to see only space marks and no other non-printable symbols, do the following:

2.   In the Word Options dialog box, on the Display tab, under Always show these formatting marks on the screen, check or uncheck the Spaces option: 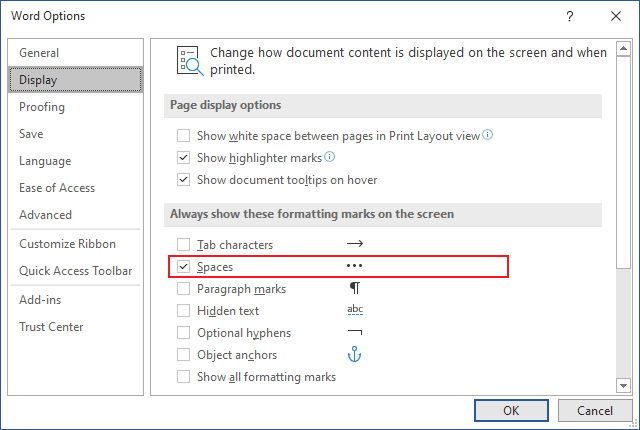 How to show/hide nonprintable symbols in a Word document 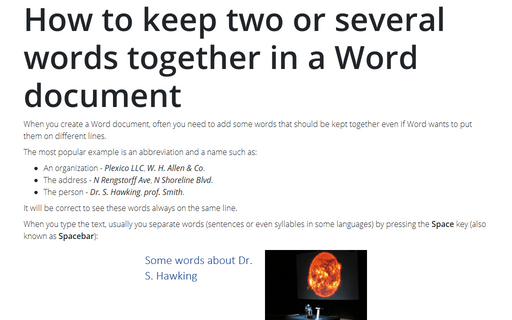 When you create a Word document, often you need to add some words that should be kept together even if Word wants to put them on different lines. 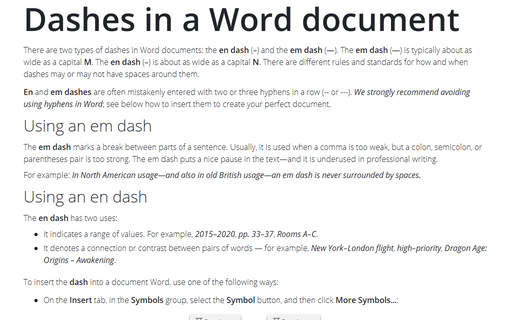 Dashes in a Word document