Word 365 2016
A currency symbol or currency sign is a short designation for the name of a currency. It can be a letter, letter combination, hieroglyph, syllable, special sign or symbol, other varieties of graphemes, graphic abbreviations, abbreviations (including in the form of a letter code), conventional letter designations, as well as their combinations. Even a whole word can be used as a currency sign.

Recently, most computers and laptops have added the local currency sign on the keyboard for faster typing. However, it is often required to work with other currency symbols in Word.

Note: Be careful when working with foreign currency symbols. Some of them have (or had) different forms for singular and plural, such as Loti (L) for singular and Maloti (M) for plural in Lesotho.

This tip is about inserting the currency symbols into the text. See more about equations in Word.

I.  Using a shortcut key:

Currency Symbols is the name of a group of typographic characters in the Unicode standard, located in the 20A0-20CF range, including some short representations of currencies. Some of the popular currency symbols:

Note: You can see the combination in the Character code field in the Symbol dialog box (see below).

To open the Symbol dialog box, on the Insert tab, in the Symbols group, select the Symbol button, and then click More Symbols...:

On the Symbol dialog box, select the symbol and click the Insert button: 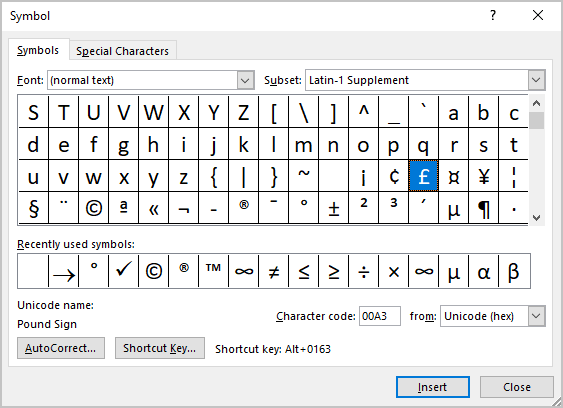 To find the currency symbols faster, in the Subset list, choose the Currency Symbols subset: 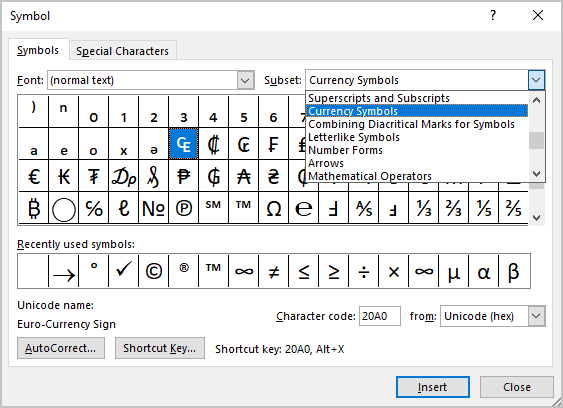 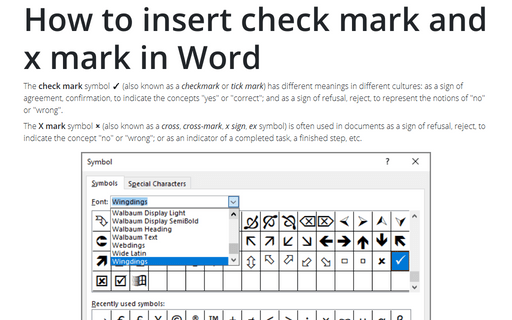 How to insert check mark and x mark in Word

The check mark symbol ✓ (also known as a checkmark or tick mark) has different meanings in different cultures: as a sign of agreement, confirmation, to indicate the concepts "yes" or "correct"; and as a sign of refusal, reject, to represent the notions of "no" or "wrong". 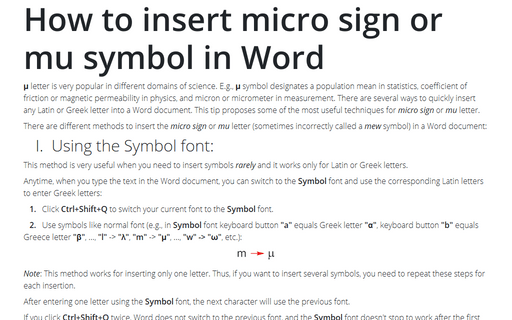 How to insert micro sign or mu symbol in Word

μ letter is very popular in different domains of science. E.g., μ symbol designates a population mean in statistics, coefficient of friction or magnetic permeability in physics, and micron or micrometer in measurement. There are several ways to quickly insert any Latin or Greek letter into a Word document. This tip proposes some of the most useful techniques for micro sign or mu letter. 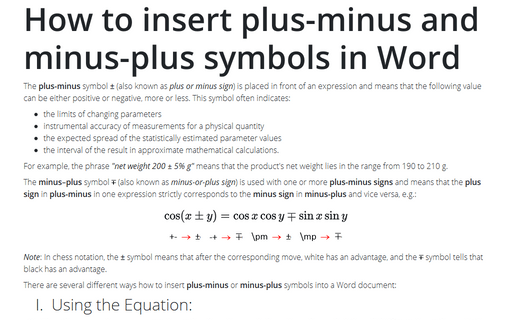 How to insert plus-minus and minus-plus symbols in Word

The plus-minus symbol ± (also known as plus or minus sign) is placed in front of an expression and means that the following value can be either positive or negative, more or less. This symbol often indicates: