PowerPoint 365
To create an effective presentation that contains equations, you need to use a special mathematical style. This style involves using special characters and syntax, a special type of line breaks, delimiters, and requirements for superscripts and subscripts.

PowerPoint offers the same Equation Editor tool as Microsoft Word and Excel for creating and formatting the beautifully designed equations you need:

Insert an equation in the PowerPoint slide

Certain equations are pre-defined because they are used frequently in algebra and trigonometry, such as the Pythagorean Theorem and the Quadratic Formula. The Equation Editor offers to use pre-defined equations instead of re-creating them.

To insert the equation into the slide, do the following:

2.   On the Insert tab, in the Symbols group, click the Equation button, and choose one of the equations from the gallery: 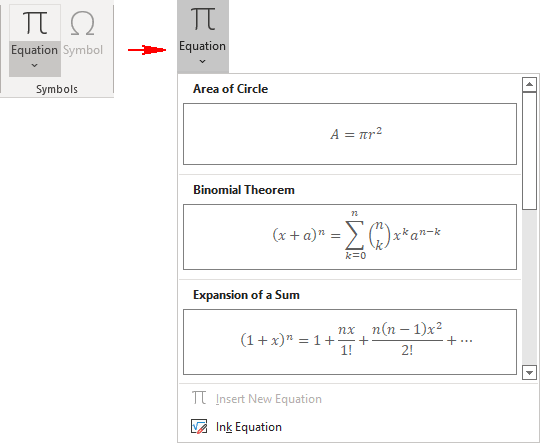 The available predefined equations include:

The equation is inserted into the existing text block or within a new text box on a slide:

To add an equation in the placeholder or into an object as a regular text, do the following:

1.   Position a cursor where you want to add a new equation.

PowerPoint adds text Type equation here right after where the cursor was:

To create a new text box with a new equation, do the following:

1.   Make sure that no objects are selected on a slide.

2.   On the Insert tab, in the Symbols group, click the Equation button (click its face, not its down arrow):

PowerPoint creates a new text box in the middle of the slide with the Type equation here placeholder for a new equation:

To create a simple equation, just start typing it in the Type equation here placeholder. You can use any number, letter, or symbol from the keyboard.

To insert any of a wide variety of the math symbols, select them from the Symbols group on the Equation tab (it appears when you position the cursor into an equation placeholder):

to choose a different set of symbols if necessary:

For example, the Geometry set:

The Equation tab offers to insert templates for various structures. Structures are symbols or combinations of text placeholder boxes that help you create mathematical equations that could not be easily expressed on a single line of text:

When creating an equation, a structure is added, which is then filled with other structures, text, or symbols. According to Microsoft, there is no limit to the complexity of equations.

See more about equations in Word.

Some users prefer to insert math and other symbols using shortcuts. To easily work with shortcuts and for another purpose, you can switch an equation to the Linear layout.

To switch between the Professional and Linear layouts of the equation, click the appropriate button on the Equation tab in the Tools group:

The Professional format displays the equation on multiple line levels:

Where the Linear form displays it on only one line:

Even though equations look like specially formatted text, due to their nature, there are some differences in how equations and regular text are formatted: 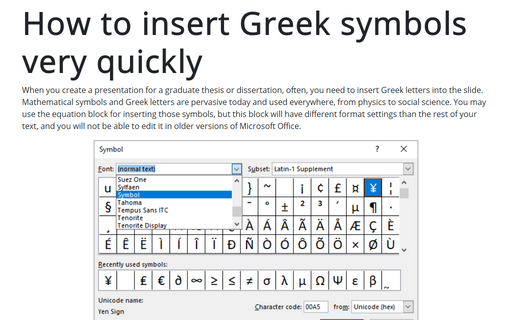 When you create a presentation for a graduate thesis or dissertation, often, you need to insert Greek letters into the slide. Mathematical symbols and Greek letters are pervasive today and used everywhere, from physics to social science. You may use the equation block for inserting those symbols, but this block will have different format settings than the rest of your text, and you will not be able to edit it in older versions of Microsoft Office. 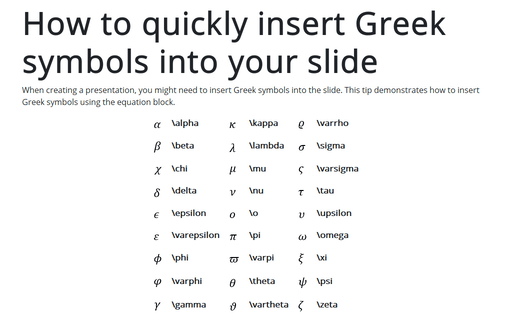 How to quickly insert Greek symbols into your slide 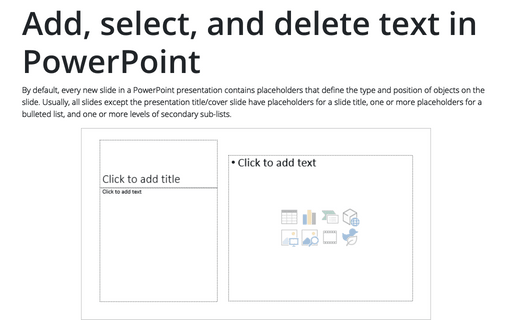