If the direction of the time difference doesn't matter, you can use the ABS function to return the absolute value of the difference:

This negative time problem often occurs when calculating an elapsed time - for example, calculating the number of hours worked given a start time and an end time. This presents no problem if the two times fall on the same day. But if the work shift spans midnight, the result is a negative time.

For example, you may start work at 08:00 PM, and end work at 5:00 AM the next day. Using the ABS function (to calculate the absolute value) isn't an option in this case because it returns the wrong result (15 hours). The following formula, however, does work:

In fact, another formula (even simple) can do the job: 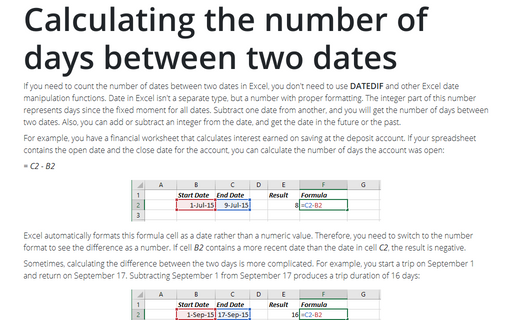 Calculating the number of days between two dates

If you need to count the number of dates between two dates in Excel, you don't need to use DATEDIF and other Excel date manipulation functions. Date in Excel isn't a separate type, but a number with proper formatting. The integer part of this number represents days since the fixed moment for all dates. Subtract one date from another, and you will get the number of days between two dates. Also, you can add or subtract an integer from the date, and get the date in the future or the past.

How to format negative timestamps

Excel supports different formats for positive and negative numbers. You can combine text and formatted values to make the display more presentative. Another numeric format is a timestamp, and you can find a difference between two timestamps and display it in days, hours, and minutes. However, Excel does not handle well negative timestamp differences.

When calculating the difference between two dates, you may want to exclude weekends and holidays. You can see how to calculate the number of Working Days between two dates for the usual, standard working week where weekends are Saturdays and Sundays.