Excel 2016 365 2013 2010 2007 2003
Named ranges are a powerful Excel feature that allows you to assign a symbolic name for the cell or the range of cells for later use as a convenient replacement for cell/range address in formulas.

Before you begin, however, you should be aware of some important rules for the names of named ranges in Excel:

Excel also reserves a few names internally for its own purposes. Although you can create names that override Excel's internal names, you should avoid doing so. To be on the safe side, avoid using the following names: Print_Area, Print_Titles, Consolidate_Area, and Sheet_Title.

Create a named range in Excel

To create a named range, start by selecting the cell or range that you want to assign a name. Then, do one of the following:

Type a name in the Name field (Excel can display the name if you selected a data range with a heading line). The active or selected cell or range address appears in the box labeled Refers to. Verify that the address listed is correct and then click OK to add the name to your spreadsheet and close the dialog box.

Note: A faster way to create a name is to use the Name box (to the left of the formula bar):

Select the cell or range to name and then click the Name box and type the name. Press Enter to create the name. (You must press Enter to assign the name to the selected range; if you type a name and then click in the worksheet, Excel won't create the name.) If the name already exists, you can't use the Name box to change the range to which that name refers. Attempting to do so selects the range instead.

If your formula uses named cells or ranges, you can either type the name in place of the address or choose the name from a list and have Excel insert the name for you automatically. The worksheet contains two defined names: Names and Values.

Insert a named range reference into the formula

There are ways to insert a named range reference into a formula are available: 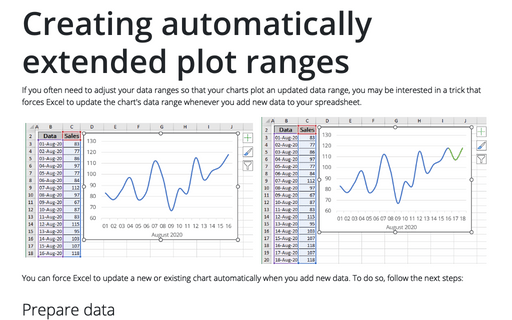 If you often need to adjust your data ranges so that your charts plot an updated data range, you may be interested in a trick that forces Excel to update the chart's data range whenever you add new data to your worksheet. 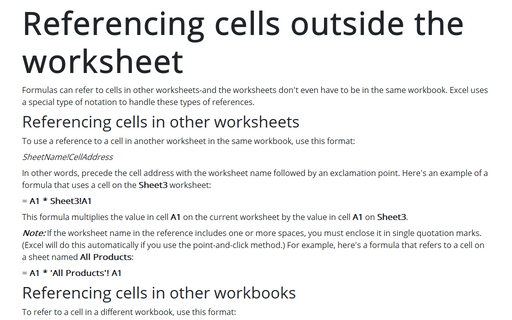 Referencing cells outside the worksheet

Formulas can refer to cells in other worksheets-and the worksheets don't even have to be in the same workbook. Excel uses a special type of notation to handle these types of references. 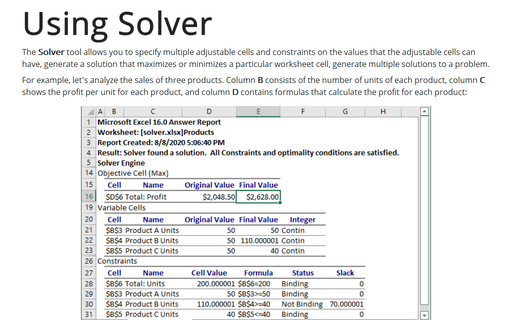